Posted in Characters, Romance, The Hounds of Annwn, To Carry the Horn, and Works

I'm at about the mid-way point of my current work in progress, and it's time for some romance.  This first book in the series only covers about two weeks, very busy ones, so the most I want to do is have the characters meet each other and begin to form an attachment.

There's just one problem — she's an older woman.  As in, he's 33 and she's somewhere upward of 1500 or so.  Now, the issue isn't her looks.  She's a timeless fae and seems to be about his age.  It's not that our hero isn't attracted to her.

The problem is that he's rather intimidated.  To begin with, she's a serious artist, one who has had centuries to work on her craft.  He understands her work well enough to admire it.  But what can she see in him?  He's a smart well-educated guy, but she's a serious intellectual.  Wouldn't she look at him as a child?  Wouldn't all those years of experience make him transparent to her, the way we can look right through a 5-year old?

And yet…  He's brave, stubborn, and kind.  And he wants her.  These are all qualities she admires, and she lets him know.  All he can do is stiffen his spine and assume a confidence and equality in the relationship that he doesn't yet fully feel, hoping not to become Nick Bottom to her Titania.

What helps is his realization that this must happen all the time with the fae.  With such long lives, they must frequently intermix much older and much younger in couples, and it doesn't mean to them what it means to mortal men

Word cloud at the mid-way point

Posted in The Hounds of Annwn, To Carry the Horn, and Works

I am approaching the halfway point on To Carry the Horn (a least, I sure hope so!) and thought I would take a moment to see what sort of word cloud the text so far would create.

Here's what happens when I dump 70,000 words into Wordle. Think you can guess the name of the hero? 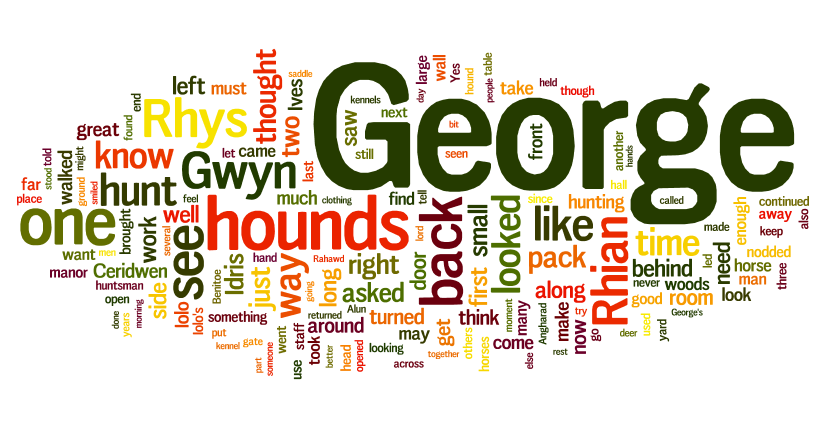 Part 1 of this article is here.

In classic science fiction, the story is about an idea and its results. Given X, how is human society affected? If people lived forever, how would society change? If energy were unlimited and free, what would be different? If time travel were possible, what would that mean regarding alternate realities?

Some authors would do their darnedest to keep X as close to known science as possible. Hal Clement, for example would discuss at length the physics of heavy gravity planets and stars so that X would not be “fantastic” and he could explore the notion of a race of sentient beings evolving in those conditions. Other authors cheerfully threw physics out the window and just made up a few new rules (“yep, turns out we can read people's minds after all”) so that they could get on with exploring the results of X. As readers in the genre, we agree to accept the premise of X in order to explore the ramifications within the world of the story.

Posted in Setting, The Hounds of Annwn, and Works

I need to set the stage for this article first…

I go back a long ways. I remember the “paperback revolution” when I was a child because I could finally talk my mother into buying almost as many books as I wanted. Ace Doubles were just coming out, and I read more science fiction than anything else in my book-heavy childhood. I never went to school with fewer than 3 paperbacks, in case I ran out during the day. All this to say that I know my classic science fiction well.

Fantasy during that period, on the other hand, was largely a wasteland of Victorian juvenilia and the occasional odd foray by a literary sort (think: James Branch Cabell) or a conventional science fiction author — until high school, that is, when at last the authorized paperback editions of J. R. R. Tolkien's The Lord of the Rings and The Hobbit became readily available in America. I bought them all immediately and devoured them, and they changed my life in unexpected ways.

The journey of the adult hero

Posted in Characters, Heroes, Plot, The Hounds of Annwn, To Carry the Horn, and Works

To kick off this new blog, I've decided to share a few thoughts about heroic plots involving non-juvenile heroes.

The typical journey of the hero involves a young man who follows a call and leaves his childhood behind him, maturing through action and conflict into a suitable, perhaps even great, adult. The plot is typically done with him once his path to maturity is complete. It's a young man's tale.

In To Carry the Horn, my current work in progress, the basic plot concerns George Talbot Traherne who is drawn from his Virginia countryside life to an otherworld populated by characters from Welsh mythology. George is 33 years old when the action starts. He is already mature, comfortable with responsibility, his character formed. How then can he become a hero, in the traditional sense of the plot?

The answer is in the deficiencies of the modern adult world versus the idealized world of heroic tales. For a youth in a traditional story, part of the challenge of becoming a hero is finding something worth doing, recognizing and growing into his proper place in the world. George, however, lives in a world all too real and mundane, where many of the basic adult responsibilities of manhood are watered down or absent. He has grown into a proper place in that world, but that world is not serious enough to satisfy him. It's too similar to the protected life of childhood that the youth in a traditional tale seeks to escape.

Perhaps if he lived a life of direct action (military, police, etc.) he might feel differently, but he is just an ordinary, good, competent man feeling constrained by the exigencies of modern life.

The otherworld provides him with scope for action, to explode out of his stunted growth into true maturity. He finds something worth the doing and eagerly seizes the opportunity. He can now build a foundation for a life worth living.

Almost 20 years ago, Perkunas Press was created to print and distribute a songbook of 100 traditional works arranged for multiple voices. And when I consolidate all my geographically scattered storage units, that book will again be for sale, from its original printing. As you might infer, I am an amateur musician.

But I am also a writer. Today I have started the first book in my Epic Fantasy series: the Hounds of Annwn. The release will be in the Autumn of 2012, and I am looking to sharing some of this adventure with my readers.

In the wonderful new world of indie publishing there are dozens of new skills to learn, from book and cover design, to eBook and print layouts, to marketing and distribution. This blog will mostly be directed to my readers, the ones for whom my books are written, rather than to the many fine writers who are so diligent about helping us find our way in this new world.