Category: The Ways of Winter

Posted in Bound into the Blood, Goals, Heroes, King of the May, The Hounds of Annwn, The Ways of Winter, and To Carry the Horn

As some of you know, I moved from Virginia to Pennsylvania in May, just as I was finishing King of the May. We relocated to our vacation home in central Pennsylvania, an old log cabin (with improvements) nestled into a hollow of the Allegheny mountains.

No one had lived in the cabin for 10 years beyond a few relatives visiting during hunting season, so the place had to be emptied, cleaned, repaired, and painted. On the Virginia end, this included moving two different households to a single smaller location and a warehouse, so it was beyond complicated. I did my best to keep writing each day but the dust is still settling and will be for a while. (Half of my office is still in boxes.)

You may have noticed that King of the May is published by Perkunas Press, still in Hume, Virginia. It will take a little while for me to register the business in Pennsylvania, and after that new printings (and my bio) will show the update.

Meanwhile, I've started on Bound into the Blood, book 4 of The Hounds of Annwn. Since I include the first chapter of the next book at the end of the current one, I had to write the first chapter before I could publish King of the May. So I have a pretty good idea how this one is going to roll out.

It will be a more intimate book than King of the May, as The Ways of Winter was more intimate than To Carry the Horn. George will look for answers about his father's family, and the search will take him to strange places with unusual companions (Seething Magma will be coming along).

These four books of The Hounds of Annwn will cover most of a year, from mid-October to end of summer. Interestingly, they are coinciding with the same seasons in real life as I write them — helps me stay in the mood.

I'll produce some more short stories in The Hounds of Annwn world, and collect them into an anthology (sign up for my newsletter to hear about each new one as it comes out and read it for free on my blog), but after Bound into the Blood (sometime this fall/winter), I intend to begin a new fantasy series, The Affinities of Magic.

Depending on the wishes of my readers, there may be more adventures in store for George Talbot Traherne. Please let me know — I'm listening.

The Ways of Winter (excerpt) – Chapter 1

Posted in The Hounds of Annwn, The Ways of Winter, and Works 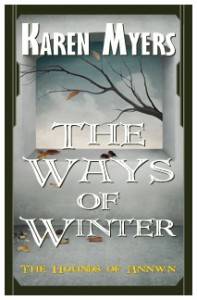 Prologue
*I’m sorry I ran away, Mother. I want to come home now.*

Seething Magma raised her mantle in the dark underground cavity and interrupted her meal of crushed rock. At last, she thought, relief flooding her limbs. It had been almost a thousand years since she’d heard from her youngest child.

*Where have you been?* she scolded, then emended, *Never mind, just come home.*

*I can’t! He won’t let me go.* Granite Cloud’s wail roused her mother’s alarm. Nothing could hold an elemental.

Finished – The Ways of Winter

Posted in Characters, The Hounds of Annwn, and The Ways of Winter

Hurray! It went like a bottle rocket, two months from start to finish. It's not that I wrote it any faster than To Carry the Horn, it's just that I poured more hours into it in a shorter period of time. Book 3 will take a good deal longer, I expect.

I still need to do a few rounds of polish and proofread, but The Ways of Winter will definitely be out in January. If you're subscribed to my newsletter, you'll be the first to know.

While one of my trusty beta readers finishes his reading assignment (“How many inches of snow?” “Give them something stronger than tea to drink, for god's sake” “Not more Welsh names with double L's”), I thought I might spend a few minutes talking about the new work.

Cutting a Christmas Tree (among the fae)

Posted in The Hounds of Annwn, and The Ways of Winter

Just in time for the holidays, here's an excerpt from The Ways of Winter (due for release in January).

For those of you who haven't read the first adventure in the Hounds of Annwn series (To Carry the Horn), our hero George has moved to the fae otherworld overlaid on his human home in the Virginia Piedmont. Newly married, he wants to start a Xmas tree tradition for his new family. There's just one problem: the fae aren't Christians and they have no idea what he's doing. Nor do the smaller folk, the lutins and korrigans.

No matter. It's a nice snowy day and everyone's delighted to go have a good time. 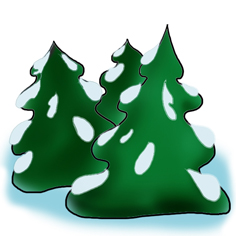 George mounted the sledge behind the manor and picked up the long reins looped around the pole on the front boards, waist high, standing with his legs braced. There were three or four inches of snow under the runners even here in front of the stables, and he gave an experimental cluck to the two heavy draft horses to see what they made of the weight and the whole contraption. They leaned forward into the harness and easily moved it a few feet before George stopped them again.

The head groom who’d found the old stone boat for him nodded with satisfaction. “I think this’ll do fine, sir. With the snow under it, they should have no difficulty bringing that a couple of miles, even if you carry a person or two. Folk don’t weigh like stones, after all.”

He’d spent much of the morning after the hound walking trying to arrange a means of transport for getting to the nearby woods for his tree. This sledge, a bit larger than a single bed, would carry his tools and the small barrel end he would use for the tree itself, with the tree in it on the way back. In the deep snow, the runners reduced the friction and made it easier to draw.

The word had spread at lunch, and he’d found a couple dozen people mounted and loitering when he’d emerged, asking to come along for a break from staying indoors. It wasn’t a complete surprise since he’d invited several of them himself, but at the sight of so many, he ducked back into the manor and begged a large sack of apples from one of the cooks. He’d carry that out in the barrel end.

After his experiment with the full harness, he looped the reins around the pole and stepped down to face the gathering.

“Glad to see you all. I’m just headed to the woods to bring back a tree for the winter solstice, but I thought we could make a party of it since the snow has eased off again. We’ll be going down to the manor gates, then up the nearby slope to the edge of the woods, maybe a total of a mile and a half each way.

“The snow’s too deep for walking, but the distance is short enough that you could ride double with some of the kids, maybe. I can take a couple of the small folk, but it could be dangerous without side rails. I don’t want to try it with children. And coming back, with a tree, it’ll get crowded.

“So, sort yourselves out. Who wants to come with me?”

The local folk, all mounted, stood off to the side. Eurig and Brynach were joking with each other, their cheeks already red in the cold, and Rhian joined them. Ceridwen had introduced him to her colleague Eluned at lunch, and the two women were sitting together astride their horses, well-wrapped against the chill.

Benitoe had persuaded Maëlys to come, mounted. George overheard him explaining that her pony could hardly run away in such deep snow. Kennel-man Tanguy had fetched Armelle, his betrothed, and now the two lutins came forward to join George on the sledge, neither one having learned to ride.

Only Broch and Tiernoc among the korrigans came along, on their ponies, but Cydifor and many of the other traveling fae had decided that this promised some fun, especially for the kids. The older children were mounted, and a few younger ones sat in front of a parent, wide-eyed.

George looked over the group and nodded. Before he turned to step up to the stone boat again, he caught sight of Cadugan walking by with Ifor, headed to a meeting with Gwyn. Cadugan was shaking his head at the spectacle, but smiling, too.

Nearing the end of The Ways of Winter

Posted in Plot, Production, and The Ways of Winter

I can hardly believe it but I'm almost there.

The first book in the series took from mid-April to early-September to complete, and then I spent a good bit of time on the learning curve of how to publish to 9 primary channels, which distribute to 36 retail channels, in 3 formats of ebook, and of course the trade paperback edition. I've only just started the process of contacting 700 independent bookstores, to add a few dozen (hopefully) to my list of local bookstores who've been kind enough to carry it.

I started the new book in early October, just as I officially released the first one. I was looking forward, in a somewhat leisurely fashion, to being much more efficient this time around in producing the versions for distribution, but I'm going to find out in a hurry, because this puppy is likely to be released in the first week or two of January.

First draft: Will complete this week. Total: 2 months. I'm stunned. (Keep in mind, I have a day job.) Heck, the editorial reviews for the first book are still drifting in, and will be for a month or more. My first drafts are near-final, so I expect to wrap this up with lots of polishing and proofreading roundabout Xmas. Give myself a week or two to format it into the editions, and off it will go.

I blame the 10-hour drive (each way) I did as I started the plot work, giving me uninterrupted time to really chew over the basic plot. Hurricane Sandy helped, too — a day without power let me concentrate on finishing the more detailed plot outline for the middle just when I needed to.

Won't be like this for the next book, though. That one will be longer and more complicated. I'm just chewing over the plot ideas now, but I can tell you one thing: much of it will take place in Gwyn ap Nudd's father's court, in the old world.

If you haven't finished reading your copy of To Carry the Horn yet, better hurry up! You wouldn't want me to write them faster than you can read them, would you?

Stay Tuned — There's a scene in The Ways of Winter that I'll post as a Xmas story. Our hero wants to cut himself a Christmas Tree, but no one in the fae otherworld has any idea what he's talking about.

Ah, the wonders of fiction

Posted in Characters, Heroes, The Hounds of Annwn, The Ways of Winter, and Works

This morning I got up at 6:15 to do my daily writing. I reflected, as I sat down at my keyboard, on what a wonderful thing fiction was, that I had gotten up early out of a warm bed (and ultimately missed foxhunting later that morning) to write a scene from the point of view of a fifty thousand year old rock elemental, because she had opinions worth hearing about regarding the plot twists of the current book.

Anywhere else, they'd lock you up for that.