Posted in A Writer's Desk, and Research

This is my great-grandmother, Clara Gasperov Mayerovich (Myers), as the Statue of Wisdom, freshly re-gilded in 2014, atop the Capitol Dome of the State of Maine, in Augusta.

(You can tell there has to be a good story behind this, right?)

Every now and then a family story is corroborated by external evidence. Clara and her husband Sam Myers left some things behind — newspaper articles and the work of their hands. And, of course, their descendents.

Samuel Nathan Mayerovich, first-born son of Nathan Meyerowitz, was born circa 1860 in Odessa, in the thriving Jewish community of that cosmopolitan city. The family stories that came down from my great-aunt Bertha, one of their daughters, remember a family that thought of themselves as native Odessans, and musicians were common.

Sam made the leap first, as so many Jews did, leaving the Russian Empire where strikes were disrupting life in the cities and arriving in Boston circa 1903, where he began a career as an artisan.

Clara stayed behind in Odessa with her three children (aged 9, 6, and 3 in 1905 — there would be two more later) and prepared to eventually join her husband. Bertha was the three-year-old, and the nine-year-old, Luzen, would become my grandfather, Louis Samuel Myers.

Perhaps you know what happened in Russia in 1905? In Odessa, a new wave of strikes began in sympathy with several cities, and the most important naval mutiny occurred, that of the Battleship Potemkin, in the port of Odessa, on June 27, 1905. (Which is really June 14, 1905 in the rest of the world, since Russia didn't convert from the Julian calendar to the Gregorian calendar until 1918.)

Posted in Plot, and Research

As the readers of my Hounds of Annwn series have discovered, it's not fox they're after in the fae world, but other beasts of the chase.

The list of the royal beasts of hunting was always topped in the Medieval period by red deer, a close relative of what we in the new world call elk. (What the Europeans call elk, we call moose. Confusing, isn't it?)

I've seen a good bit of foxhunting in the last few years, but alas we do not (mostly) pursue deer with dogs in the US, and certainly not elk. So when I want to fles

h out my understanding of the sport, so that I can incorporate it into the world of my books, I have to turn to those parts of the world where something similar still goes on. Vive la France!

There are many fine photographers who follow traditional hunting in France, by which I mean hunting on horseback, in livery, with horns, following a pack of hounds. Examples include Stéphan Levoye and my current favorite, Eric Dubos. Modern wrinkles include car followers dodging boar and crumpled French horns.

For more beyond this small sampling of images, please check out their websites. 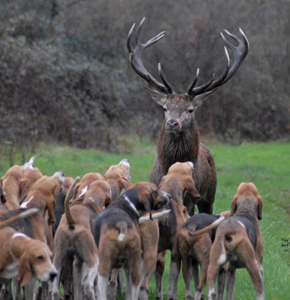