Posted in Fantasy, Night Hunt, Short Story, and The Hounds of Annwn

Another short story from the world of The Hounds of Annwn.

George Talbot Traherne thinks about the choice he made to leave the human world behind.

This story takes place between and To Carry the Horn and The Ways of Winter. 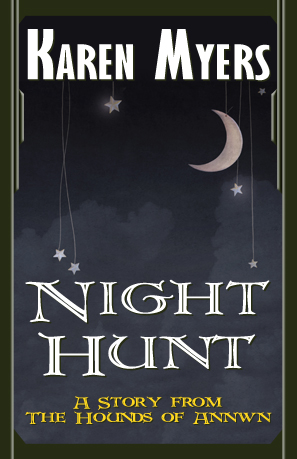 His eyes popped open in the dim light cast by the banked fire. For a moment the bed felt strange and then he remembered—Angharad’s house—and there she slept, turned away from him, breathing slowly. He was wide awake and on the alert.

What woke me? The snow was deep on the ground, muffling any outside noises. No cars were here to disturb him, no engines in the fae otherworld, and he was still getting used to the absence of the sounds of human civilization. He catalogued what he could hear—the tick of the embers in the fireplace, the occasional creak of the floorboards as they adjusted to temperature changes, Angharad’s soft breaths.

Then it came again. Muffled barks of excitement. He looked over at his dogs by the fire. Sargent, the yellow feist, was motionless except for his chest rising and falling, but the bluetick hound was quivering in his sleep, his paws twitching as he ran. He panted and yipped, his eyes closed. No wonder it woke me, he thought.

George had no trouble providing the real sound behind Hugo’s dream, the loud, deep bays as he followed a hot scent. That cry would ring off a hillside, but here it was, indoors, just a remnant to wake him in the night.

Nothing to worry about, he thought, as he relaxed back down into the warm bed by his wife’s side. He wasn’t sleepy, but if he stayed quiet, sleep would return.

Inevitably his mind turned to the tumult of his recent weeks. I made a choice, he thought, the most important of my life. I’ll never face a bigger one. I chose to turn my back on the human world and stay here, with these new-found kinsmen.