Report from the Altoona Bookfest 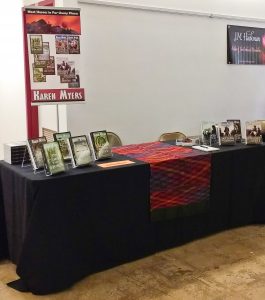 Some day I will learn to take a decent photo with a cellphone. You'd never know I've been a semi-pro photographer (with real equipment).

The anticipated outdoor festival with music and dancers was prudently relocated to 3 internal floors of the Altoona, PA library, and when the skies opened in mid-afternoon, we were all very glad. On the one hand, the venue was rather less pleasant; on the other hand, no one's books were soaked. Considering this was the first occasion for this particular festival, I thought the organizers rose well to the challenge.

The 8-foot tables were expansive (many authors were geared up for 6′) but, alas, I forgot my props to make the display more interesting.

There were 51 local authors (regional to central Pennsylvania), which covered a surprising number of genres, and both traditionally as well as independently published writers, at various stages of their careers.

Quite a few people attended, and there was traffic all day long. Though I wasn't surprised to see a couple of people I had encountered from other activities (speaking at a local writers' group), I was stunned to meet 3 local readers who actually recognized my name or the names/covers of some of my books. There was even one who spoke to me at length about an audiobook (and I have some idea just how unlikely that was, considering its obscurity.)

You meet people at book festivals that are a different cross-section of potential readers than you deal with the rest of the time. A great many did not do ebooks. Except for kids with indulgent parents, not many carried around armfuls of purchases. Budgets were in evidence everywhere (lots of proposals to do book swaps). In fact, I had a purchase after my books were boxed up and on the dolly at the exit door from someone who had wanted to buy the book earlier, but only just had a sale herself so she could now afford to do so. (Bless her — hope she enjoys it!)

Even when these affairs are barely profitable, they are useful for other reasons, particularly networking. I spoke with several people about indie publishing, got a good lead for where I can consign excess inventory when I change the covers on the Chained Adept series, and (best of all) found out about a distributor who would be a good fit for me at unusual outlets like gift shops, truck stops, etc. (once I figure out how to make a physical book catalogue of the right quality without paying a fortune). 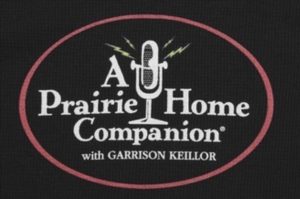 Come see me and lots of other authors at the first Greater Altoona Area Book Festival at the Altoona Public Library (a big modern building) on May 12. My books are already in the library there.

I have two book fairs lined up for this year, so far. The first is very local — Altoona is the nearest small city in my area, famous for its railroad history and the Horseshoe Curve constructed in 1854. The second is regional — The Allegheny Regional Festival of Books in its first year, in Bedford, PA, September 14-15.

Book fairs are something like camping trips — you lay out all your gear on the bed and make lists and try to make sure nothing is missing, with the added complication of checking that your credit card app (Square) still works with your current cellphone. Then there's the new cheap black tablecloth — is this one truly rectangular unlike the last one which surprised you at the last event you by being oval?

I've replaced my bad HollowLands business cards with better ones, so that I now have cards for Perkunas Press (publisher), HollowLands (writing colleagues), and Karen Myers Author (readers). I find it handy to cover all bases at book fairs like this, not just readers.

And, finally, I have to update the big display poster (3′ by 1.7′) that hangs from a stand and hopefully intrigues prospective readers from across the room. The posters themselves are very inexpensive, but this is my first with the new branding for Karen Myers Author and it had all sorts of imponderable issues. I really wanted to show off the new book covers for the Affinities of Magic series, though those books are not yet released. And the new covers have made me dissatisfied with the old covers for the Chained Adept series — my new cover artist has agreed to make four new covers for me, but in the meantime they don't look well compared to the new series.

By the time the second book fair this year rolls around, I may have new covers for the Chained Adept series, and there will be more entries in the Affinities of Magic series, so I'll be making a new version of this poster again.

It was a splendid autumn day, and Foxburg is a lovely little river town along the Allegheny River not far from Pittsburgh. The single riverfront street was lined with vendors in tents selling food and trinkets of all kinds, and alpacas for the petting roamed the library lawn.

The library was a nice, old building, with one large front room, some stacks in a back room, and a tiny alcove for children's books. The library ran a used book sale, and there were eight of us indie authors inside, selling our wares.

Or, at least, that was the theory.

All the signage mentioned “used book sales”. None of it mentioned visiting authors and new book sales. If you weren't in the main room, like me, you were essentially invisible. That would have disturbed me more, except that it became clear after we compared notes that few of us had sold even a single copy of a book.

Our hosts were just as nice and helpful as they could be, but the absence of proper signage meant that few people dropped by, and none were prepared to find anything except used books and had a hard time understanding that there were actual authors there prepared to sell them something else.

Sigh… So after a few jokes about starting up a couple of bridge games, we spent the time sharing stories and tips about writing and publishing. I got some recommendations for other book shows (somewhat sardonically) from one of my neighbors. And we shared lists of books-to-read in various genres.

At least I got to try out all my new gear for setup and display (on a card table). The only hitch was the tablecloth — I bought a rectangle suitable for a 4'x8′ table and expected to have some difficulty folding it neatly for a square 3′ x 3′ table, but little did I know… The cloth, marked “rectangular” in the packaging was actually round. That, my friends, is why you bring large ACCO clamps and tape to show events.

At least I had the opportunity to network a bit with other authors. Here I am with Cindy Marsch, one of my colleagues from the Alliance for Independent Authors. 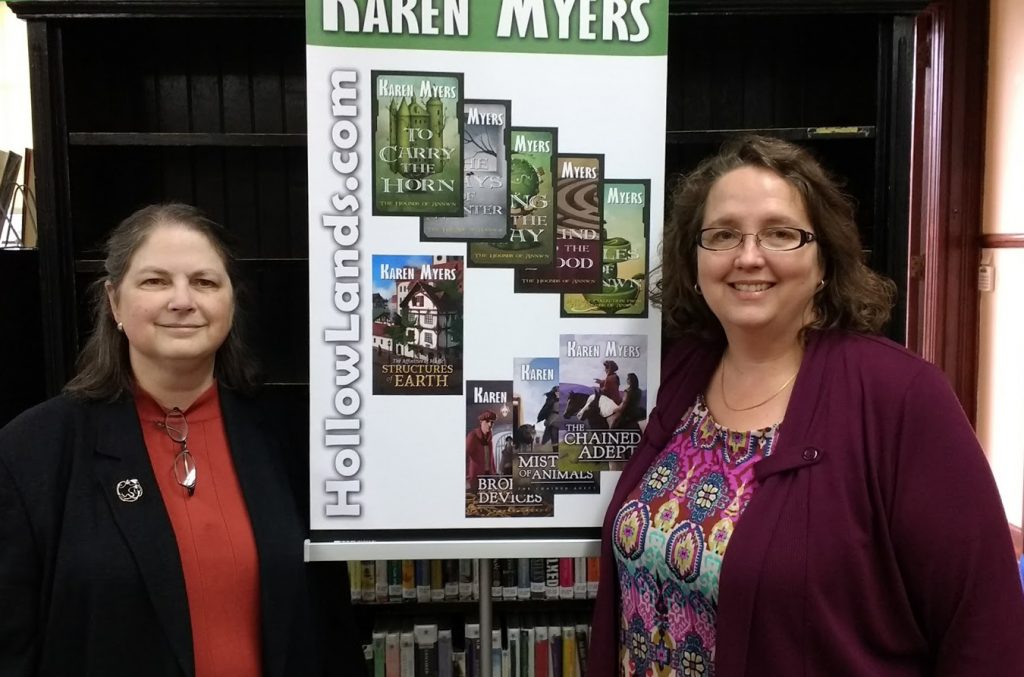 Going through my inventory before tomorrow's Indie Author event at the Foxburg Fall Festival. The cats who were helping me are snoozing on the pillows, out of frame.

If you're in the Pittsburgh PA area on Sunday, October 9, come drop by!

Setting up for an author event

On October 9, I'll be one of several authors at the Foxburg Free Library in western PA, with a table for presenting my books.

For the first time, I've had to make the effort to get the full panoply of gear necessary for such a thing. This includes, but is not limited to: display stands for books, tablecloth, business cards, bookmarks, newsletter signup sheets, promo pens, a cash box, receipt books, and (of course) books to sell. Not to mention a gear bag to carry things in. Tape, clamps,… you name it. Everything except lamps, table, chairs, and tent.

Naturally I had some of this already, but now I'm treating it seriously.

Here's the banner. Click on it for the full effect (it's 3 feet long).

Drop by the Indie Author Day in Foxburg, PA

Posted in Book Signings, and Events

SELF-e, which works to distribute independently published work to libraries in the US, has declared October 8 to be Indie Author Day around the country. You can watch a live webcast on Saturday, October 8, at 2:00 EST.

Coincidentally, the Foxburg Free Library, not far from Pittsburgh, is participating in the 13th Annual Fall Festival on Sunday, the 9th, and will be hosting several authors on the premises as part of the festivities.

If you happen to be in western Pennsylvania and fancy spending some time in a lovely autumnal river town, maybe I'll see you there! I'll be giving a talk at 11:00 on “Adventures in writing fantasy.” Come by, pick up a few books, and get any books you already have signed.

Win free ebooks on May 18

I'm participating in a Facebook Party for a new release of The Roar of Smoke, a book by Candace Carrabus.

Every half-hour, from 12:00 – 8:00 EDT, a new author will join the Facebook page and offer prizes and ask a question/sponsor a discussion. The winners of the prizes will be picked from the participants.

Here's the list of participating authors and prizes, along with their time slots (in Central time). To join the event, click here.

Lots and lots of books being given away — go check it out!