Posted in Cariad, Fantasy, Short Story, and The Hounds of Annwn

It's going to be a while before the next full-length book is available. It's going well, but the story will be large and a bit complicated.

In the meantime, I thought I'd start writing a few of the short stories from the world of The Hounds of Annwn that are kicking around in my head. I'll try to produce one more or less monthly. They'll only be available as ebooks initially, but I'll collect them into bundles as paperbacks every so often.

So, in time for Valentine's Day, please enjoy this brief story about a man who loses confidence that he's the man his wife needs.

This story takes place between The Ways of Winter and King of the May. 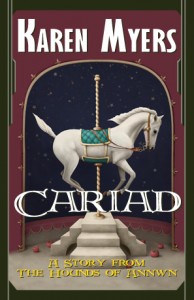 Benitoe busied himself with rechecking the girth on Halwyn, off to the side of the inn yard, and kept his eye on the side door of the main building. Two of the tall fae rode in and dismounted, chatting together. A groom came out of the stable to take their horses, a lutin in red like many of the staff at the inn, a foot shorter than the fae, or more, like Benitoe himself, though Benitoe wore his dark green hunt livery instead of the traditional red. The groom looked over and gave Benitoe a wave. “We’ve got his pony tacked up. Are you still planning to return tonight?”

“Shouldn’t be any problem with that, it’s just a few miles on horseback, through the ways, and the weather’s clear. Do you have enough space ready?”

“Luhedoc told us to expect eight, and we can just manage it.”

Benitoe took in all the construction that was still underway as the Golden Cockerel was being hurriedly restored to use. He’d seen the newest interior repairs last night after he rode in, but now, in daylight, the extent of the work was much more obvious. The stables had been in complete collapse when he’d last seen them, a few weeks ago. Maëlys had latched onto the first stone masons and carpenters to become available as the barriers dropped around Edgewood and set them to work, rightly anticipating that the reviving town would need a working inn as its dwellers came back to life, reviving from the curse that had buried them in a sort of half-life for so long.