Category: On a Crooked Track

On a Crooked Track has just been released

Posted in On a Crooked Track, Release, and The Chained Adept

Book 4 of The Chained Adept

SETTING A TRAP TO CATCH THE MAKERS OF CHAINED WIZARDS.

A clue has sent Penrys back to Ellech, the country where she first appeared four short years ago with her mind wiped, her body stripped, and her neck chained. It’s time to enlist the help of the Collegium of Wizards which sheltered her then.

Things don’t work out that way, and she finds herself retracing a dead scholar’s crooked track and setting herself up as a target to confirm her growing suspicions. But what happens to bait when the prey shows its teeth?

In this conclusion to the series, tracking old crimes brings new dangers, and a chance for redemption.

Order direct from the author, or see the publisher for a growing list of retail sites.

On a Crooked Track (excerpt) – Chapter 1

Posted in On a Crooked Track, and The Chained Adept 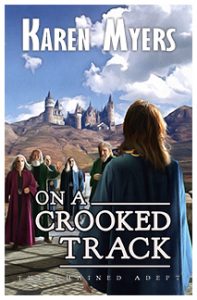 Wood everywhere—the solid pier on which Penrys was trying to find her land legs, the ship moving gently beside it in the harbor at Ellech after almost two months at sea, and the entire forest of a city spread out before her, topped by the clusters of signals towers like groves of mountain spruce trees.

It smelled like home, all that wood—weathering away in the buildings, or freshly cut in the long arm of the hoist that was even now swinging cargo off the ship, or burning as firewood and flavoring the crisp spring breeze.

Home was in the woolens everyone wore, retentive of the odor of hard work and dinners long past. It was in the hair and beard dressings of the dock workers, leavened by the exotic aromas of some of the southern cargo, destined for the perfume manufactories.

Penrys inhaled deeply, feeling the rightness of the environment deep inside her. She hoped they’d have a few days to spend in the harbor cities at the base of the two rivers before moving upriver to Tavnastok so she could get started doing her research at the Collegium, but that would depend on her mentor, Vylkar, visible on the wharf at the end of the pier making arrangements for their cargo.

Najud and Munraz were having troubles of their own adjusting to an unmoving surface. “Come on,” she said, picking up her pack. “The sooner you start walking, the easier it will get.”

“Does it work that way for you?” Munraz asked, gamely lifting his own gear.

“Don’t know—I’ve only read about it.” She chuckled at his outraged expression. “I’ve never been on a ship before, not at sea. Never been in Stokemmi, either.”

Striding off down the pier, she called over her shoulder, “Let’s go explore.”

She made a game of anticipating exactly where her feet would meet the planks until her body adjusted to the change of terrain and she stopped stumbling. Her footing wasn’t improved by her hard-soled boots, donned for the first time in a while after the bare feet or soft shoes of shipboard life.

The three of them clattered to a stop behind Vylkar. Two piles were accumulating before him as they came off of the hoists. The larger one, goods destined for trade here in the city, were to be stored in the warehouse used by the Collegium for its own supplies. Cargo handlers were stowing the horse packs onto two wagons to move them there, and the draft horses waited patiently, their breath visible in the chilled air.

The laborers joked with each other as they worked, swapping insults that would bring a blush to a hardened campaigner. Many ships were in harbor, and this wharf, one of several, was busy, filled with people earning a living and working up a sweat doing it.

It was noisier, smellier, and far more vivid than the river harbor at Yenit Ping, and Penrys wondered what Najud and Munraz made of it. Except for the sea at their back and the size of the city, it could almost be Tavnastok, two hundred and fifty miles upstream from the mouth of the Lodentaf, just visible as a gap in the wharves far to the west along the shoreline. She’d seen sights like these there, running errands for the Collegium.

Their personal bags went into a hired two-wheeled pony cart. They would walk alongside it toward the center of Stokemmi to wherever they took rooms.

“I warned you about the beards.” Penrys surveyed the wharves with a stranger’s eye and noted how many people were clearly natives (most of them), male (most of those), and bearded (all but the children). The few men of other nations, mostly officers from some of the ships in harbor, looked astonishingly youthful with their shaven faces.

“You’ll find plenty of foreigners here, and they shave,” she told them. “I was never sure if that was out of fastidiousness, or because they couldn’t raise a competitive beard and were afraid to try.”

Some wore their beards in braids, or loose down their chest. Others had neatly trimmed, no-nonsense specimens. And here and there, especially for the citizens who’d come down from the city on business, elaborate grooming and stiffening fashions were on display.

“Do they breed for it?” Munraz asked, in a hushed tone that said he wouldn’t be surprised by an affirmative answer.

“Hard to say. The boys compete with pride to see who can sprout first, and survey their fathers and older brothers with envy. Maybe the less hairy ones have had a harder time finding a bride, and so they’re all bearded now.”

She smiled at the open alarm on his face. “Don’t worry, you can keep a beardless face and foreign clothing—no one will think it strange. Foreigners mean money, here—trade and business and interesting foods.”

Najud looked unconvinced. She wondered if he thought he had to cultivate a beard to measure up, and then she wondered if he could. She’d seen him in stubble, but she’d never seen a bearded Zan, just the somewhat patchy results of a couple of months of neglect. That would never work here, in Ellech, and they didn’t expect to be here any longer than that. Better to choose a different display of manhood.

Ah, but how do you tell a man that? She suppressed a smile.

Cover Reveal – On a Crooked Track

Posted in Artwork, On a Crooked Track, and The Chained Adept

Here's the final draft of the cover art for the fourth and final book of The Chained Adept series. There will still be some tinkering with the position of the author name for consistency with the other covers, but my cover artist Jake Bullock is done with the illustration.

The scene I wanted to illustrate was Penrys returning to Tavnastok in Ellech. The famous Collegium lies across the river, but her passage is barred by some of her old colleagues.

See how it looks with the other three books in thumbnail, compared to other fantasy covers (click to enlarge). This is the acid test for legibility.

We began with three sketches to sort out the composition.