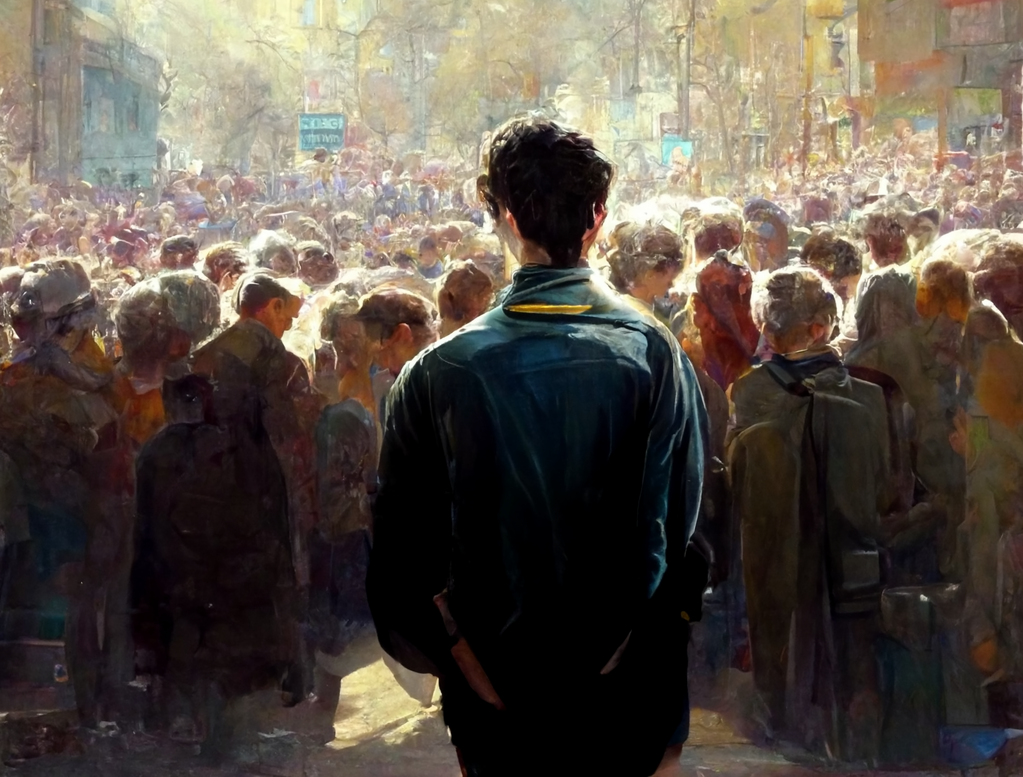 Posted in A Writer's Desk, Just for Writers, and Plot

I had a dream a while ago…

I was standing motionless, and all around me there were crowds of people going about their business. The scenes shifted, but the situation remained the same.

None of them could see me. There was a sense of removal, not as if I were a ghost but as if they could have seen me if they'd wished to, but none of them so chose. So I felt not just ignored, but left out, rejected.

Suddenly, one of the men turned to me, looked me in the eye, and declared “There you are,” welcoming me back to the human race (and waking me up).

The odd emotions stayed with me, and catalyzed into an important bit of fiction, and I wanted to analyze how that worked.

I'm sure none of your dreams are invaded by your characters, right? (Hah!) In my case, I often drop off while ruminating on a bit of writing, and come up with fragments of dialogue or motivations that I scribble down at bedside so as to remember them in the morning, but I don't get actual full character visits (thank goodness). In this dream, it was my own persona (not a character) who experienced it. Until I turned it to better use…

Right now, I'm in the middle of writing book 3 of a not-yet-released-series (The Affinities of Magic), and book 4's setting is already known (though not the plot). But book 5 is a mystery. Or used to be. This dream fragment has mutated into the central crisis of book 5.

Each of the books in this series has common plot elements (the discovery/exploitation of a new entry in the industrial revolution of magic that is the series framework). But that's just the background setting, from a story-telling point of view. The structural story turns on the hero's journey and a typical mid-point crisis.

The more I thought about the dream fragment, and how it persisted in my own recollection, the more I realized what it represented. It was the bare affect (without the backstory cause or the terror) of the thousand-yard-stare, the psychosis of disassociation. What would it be like to undergo experiences in reality so devastating as to force such a break? If the little fragment of a dream resonated with me, wouldn't a full-blown version resonate with readers?

To ask that question is to answer it. For this book's mid-point crisis, the hero will stumble into a situation where the unplanned discovery of a new bit of magic puts him at the mercy of impersonal forces that can't be reasoned with, only survived. He resists as well as he can, but it marks him, of course, and all of those around him who can neither fully understand nor help. He has to pull himself out of his own personal hell — no one else can do it for him. [And just to forestall you, gentle reader, there is no sexual component to any of this.]

Making this happen in “story” creates an interesting set of technical issues. When the causative accident occurs, we see it from the hero's POV, but only up to the point where he begins his captivity by circumstances. He is alone at the time, and no one (including the reader) knows what has become of him or where he has vanished. Their alarm and speculation heighten the reader's tension. After an extended period of suspense, the hero is found as the effect starts to wear off (a version of the dream fragment makes it into the writing), but we still don't see it from his POV yet. His friends and family are relieved, but (like the reader) don't understand much of what has happened to him. And he is not the same…

The big technical question becomes… when do we start getting the hero's POV back? When do we find out what really happened — the psychology of it, as well as the simple facts?

The reveal of the crisis will come in bits… First will be fragments divulged to his wife, some of the bare facts, but not the lingering psychological damage. The hero presents an abbreviated story for public consumption, but everyone suspects this is concealing a great deal. Then there's the hero's peculiar behavior demonstrating the damage that resists explanation. The hero will reveal little private thoughts to the reader without going into the original causes. Finally, there will be a scene where the hero is cornered by a male relative and forced to describe most of what actually happened. Not everything — some of that is permanently suppressed by the hero (but revealed to the reader in his thoughts). Only then can he force himself to take effective steps to improve the situation, though some damage will linger.

I've never tried to do a mid-point crisis in extended suspense like this before, but it seems to me to be the best way to handle the situation. I'd never have considered it before I had that dream. I'm the sort of person who's comfortable with a particular novel/story-telling structure that works for me, not one who seeks out experimental challenges just for the hell of it.

It's also surprised me that I could create this chunk of story in a vacuum relative to the rest of the non-existent plot. I'm confident I can shove it into place once that point arrives and have it work, which is a new feeling of competence for me. (Well, it'll be my 13th book by then–I guess it's about time…)