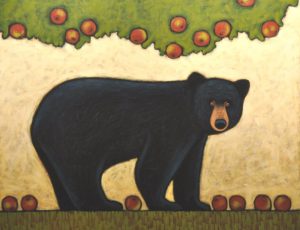 We have bears, and we have old orchards. Naturally, we also have bears in orchards. And among the distractions for writing and publishing, we have fierce Central Asian sighthounds seeking employment.

Normally the nocturnal set and the diurnal set don't meet, though the dogs are very interested in the scent trails they can reach, within the several acres around the cabin enclosed by the underground dog fence. The main dog field out front is also the main traffic area for all the critters, as one of the highways to the stream that waters the farm where they have a good view for predators. Most of them are smart enough to check to see if the dogs are out first before dropping by. And on those occasions where we let the dogs out without checking first ourselves, they're all quite capable of running, flying, or going to ground, according to their kind.

We get a regular daytime show of deer, turkey, and groundhog. At night — who knows what they all get up to? Certainly we have raccoons, possums, and porcupines (just to cite the larger mammals), along with the occasional coyote passing through. And we have black bears out back, like most of the wooded and mountainous areas in Pennsylvania.

This year, we've been seeing a sow and two cubs. They're regulars — our bird feeders are trashed annually, and the garbage cans are a challenge. Seeing them by daylight, though, isn't so common.

But it's August… and all the trees in the old orchard that still bear fruit (apples and a few pears) are heavily laden.

A couple of weeks ago, our taigan (just a year old) spotted a cub on the wrong side of the dog fence and his “defend the yurt” genes kicked in. He let out this basso profundo roar, rather like a lion, which echoed down the hollow in rich, rolling, vociferous tones. The cub wandered off upslope into the orchard and out of reach but we didn't know where its mother was, and Hussar isn't always restrained by his underground dog fence.

Our Tazi, Uhlan, was more prudent — some barking, and then a return to the cabin. But Hussar would not stand down, or let himself be caught for a leash. No, he was going to run that bear off, by god. I had quite a merry chase before I could entice him within reach and leash him. He and the cub looked much alike – black, shaggy, and goofy — except that the bear cub was about twice as wide.

Then this morning, Hussar was on his way in the back door when he spun and charged to the edge of his underground fence and started barking again. This time it was the sow who was visible, cracking branches to reach the apples and desultorily wandering back into the brush further up the orchard with both me and the dog sending a duet of “Get out of here, bear!” and “You just come over here and I'll show you what I think of you!” after her as she vanished from sight.

It's a wonder any writing gets done…