Posted in A Writer's Desk, Just for Writers, and Marketing

I'm currently knee-deep in improving my complete mailing list and newsletter setup so that I can start to launch improved marketing via Facebook ads. This requires all sorts of retooling for digital stationary, branding, automation, landing pages, onboarding… the whole megillah). Lots of learning curves and emails-to-customer-support to clear up the messy details.

The result will be better newsletters for everyone, significant incentives and offers for signing up, and hopefully a larger group of more engaged readers. If you're already a subscriber (one of my select few) I'll be telling you separately in more detail. (Once I figure out how to, using all-new tools…)

In the midst of all this productive diligence, just the sort of message that every writer of fantasy likes to receive was sent my way via dinner tonight:

“A way out of financial uncertainty is discovered as if by magic!”

It's not magic — it's bloody hard work! 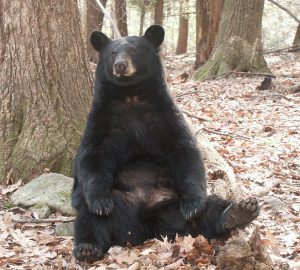 Yesterday afternoon, the mama bear put in an appearance and our taigan leaped into “defend and insult” mode again.

Alas, this is not my own picture — I never seem to have a camera handy when wrangling dogs and bears — but it's close. Instead of woods, picture the edge of the mowed ground around the buildings. She was so full of stolen apples and pears that she didn't want to move and was calmly sitting below the first row of the overgrown orchard, admiring the view down to our cabin.

And ignoring the dog, restrained (miraculously) by the underground dog fence not 25 yards away. And the human, who added her own “Get out of here, bear!” to the ruckus.

Finally, slowly, she shoved herself up and walked upslope to the tall grass, and out of sight. I've had overindulgent dinners like that myself.

I don't mind their depredations in the orchard — we're not using those apples and the critters might as well eat their fill — but I'd be happier if her family kept a bit more distance as they ravaged the apples. What happens in the tall grass stays in the tall grass.

Maybe I should give her something to read inbetween meals.

A quick look at the news — writing and publishing

Posted in Artwork, and Publishing 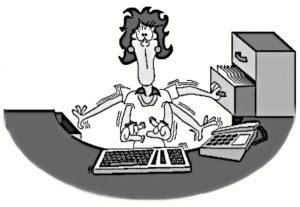 I haven't been able to produce much in the way of blogging for the last couple of months because I've been buried in writing and publishing work (and that's the way it should be).

On the writing front, I'm just about done with the Fragments of Lightning, the second book of The Affinities of Magic. The webpages will be updated when the final scene is written and I have time to do the book description, images, and so forth. I plan on writing the third book, and starting the fourth before I begin releasing them in quick succession, starting circa December/January.

As I've mentioned elsewhere, I'm also beginning to publish the works of some colleagues of mine and tooling up as a small publisher. This means, in several cases, the creation of new imprints, since the works aren't necessarily appropriate for Perkunas Press, not being fantasy or science fiction. Last fall saw the first release for Bent Twig Books, a memoir My Bipolar Life.

Right now, I'm working simultaneously on publishing two works. One is a bit of Christian visionary fiction for Sound the Trumpet Press, called Comes a Redeemer, by Tolkien scholar Jared Lobdell. And the other is a work by the great naturalist writer, Steve Bodio for Behind the Ranges Press — his first novel, Tiger Country.

In each case, these three works are the first for their imprints, so there's very little information for the imprints and, in the latter two cases, the book pages are under construction pending release. But you can take a look at the draft covers (mockups), and there will be more to tell you as each book is published this year.

We have bears, and we have old orchards. Naturally, we also have bears in orchards. And among the distractions for writing and publishing, we have fierce Central Asian sighthounds seeking employment.

Normally the nocturnal set and the diurnal set don't meet, though the dogs are very interested in the scent trails they can reach, within the several acres around the cabin enclosed by the underground dog fence. The main dog field out front is also the main traffic area for all the critters, as one of the highways to the stream that waters the farm where they have a good view for predators. Most of them are smart enough to check to see if the dogs are out first before dropping by. And on those occasions where we let the dogs out without checking first ourselves, they're all quite capable of running, flying, or going to ground, according to their kind.

We get a regular daytime show of deer, turkey, and groundhog. At night — who knows what they all get up to? Certainly we have raccoons, possums, and porcupines (just to cite the larger mammals), along with the occasional coyote passing through. And we have black bears out back, like most of the wooded and mountainous areas in Pennsylvania.

This year, we've been seeing a sow and two cubs. They're regulars — our bird feeders are trashed annually, and the garbage cans are a challenge. Seeing them by daylight, though, isn't so common.

But it's August… and all the trees in the old orchard that still bear fruit (apples and a few pears) are heavily laden.