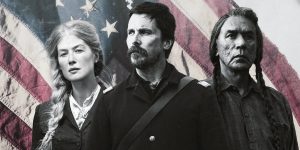 I recently saw the movie “Hostiles” (distributed widely 2018), and found in it a perfect example of how message fiction can completely kill a story. So, naturally, I had to write one of my Irritated Reviews™ to get the consequent rant out of my brain.

The premise is straightforward. It is 1892, and a cavalry captain in New Mexico is commanded, under Presidential order, to escort a long-captured Cheyenne war chief (who is dying of cancer) and his family to his old territory in Montana to die. The captain will then retire. The full synopsis is here.

Let me get a few unimportant things out of the way. The acting is quite good (to the limits of the script material) and the cinematography and costuming are well done. There — that's about it for the praise.

There are a handful of own-goals, pointless errors that could trivially have been avoided.

These are the sorts of things that throw you out of any story, whether in a book or a movie, and make you question your confidence in the storyteller.

But no matter…  I wouldn't bother writing about the movie for things this small. No, this movie had much bigger problems.

You see, this movie had a message. And it was going to make sure that we heard that message, loud and clear.

The message seems to be:

“If we only got to know each other better, we would understand everything, forgive everything, and come to admire each other. We're really all the same, if we can just learn to see it.”

Let's see how we are led like little children to this goal. 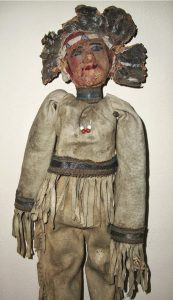 Every character exists solely to make our hero move in a certain way to a predetermined end. It's identity politics taken literally, and a complete puppet show.

Only the hero has any pretense of life, and he's primarily a spectator.

Our hero has spent his cavalry career in the Indian Wars. He's lost many men, some of them viciously killed by the old war chief. He has done his own share of brutal Indian killing and family roundups and starts the movie hating Yellow Hawk.

Our hero has a friend who's seen too much fighting and killing and is entering a suicidal depression. This is one potential fate for the hero.

A soldier who has served with Blocker for many years. He exists for Blocker to demonstrate his lack of black racism.

We kill her husband implausibly at the start of the movie (see bullets (sic) above), followed by all three of her children, so that Blocker can rescue her along the way. She exists in order to perceive and demonstrate the humanity of women, and to provide comfort to the hero, despite a recent rape. She passes much more easily to forgiveness (natural nurturing female) and proves it by adopting Yellow Hawk's grandson to take him back east somewhere.

The old enemy aka the prisoner (red) (Yellow Hawk)

This is the Indian version of the “Magic Negro” with a touch of the “Noble Savage“. Unlike the hero, he seems to have already passed the stage of anger and hostility, and has managed to create a family to comfort himself. He's there entirely to offer a model for the hero's growth. (And yet, how did he come to this place himself?)

This is Yellow Hawk's daughter, daughter's husband, husband's sister, and grandson. They exist solely to demonstrate the role of “good Indians” and, in the case of the child, to be saved by the white woman. All the rest of them die pointlessly at the end to clear the decks.

Someone has to kill Rosalee's family, and then kill some of the cavalry party, and then be killed by persons unknown (possibly the unchained Yellow Hawk and his son-in-law). We never hear a motive for their attacks — they're just there to provide a hazard. (In my household, we referred to them as the “Comanches ex machina“.)

Someone has to kidnap and rape all three of the women so that the combined cavalry and prisoner party can kill them. What they were doing there, and why they thought this was a good idea is left unstated. But now we know, gosh, that both sides have Evil People that good people must fight against, together.

Another old friend of Blocker. Unlike Yellow Hawk, this psychopath has traveled the full road to evil. This is another potential fate for the hero.

When he escapes, having killed treacherously (unlike Yellow Hawk who keeps his word), Metz overtakes him and kills him, before shooting himself (a righteous killing having apparently proved one killing too many). Luckily, both of Blocker's potential bad fates are now dead.

The racist settler and his sons (Cyrus Lounde)

The owner of Yellow Hawk's old lands. He and his three sons exist to provide an arbitrary enemy to protest the burying of Yellow Hawk and set off the final gun fight that conveniently kills everyone except Blocker, Rosalee, and Yellow Hawk's grandson. Nice and tidy, sort of a diabolus ex machina. 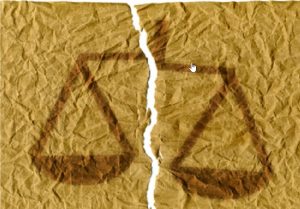 As you can see, there is some severe and highly visible scaffolding here. The script shows us one of everything, and in each racial color, as required. This is “even-handed” with “heavy-handed” obviousness. I started to cringe as each new character appeared and basically announced what he was there for.

It ends with the hero, his redemptive woman, and the Indian child they will presumably raise together, in a process of redemption and forgiveness. Nobody else mattered or had any independent existence.

No one grew or changed in the course of the movie except the hero, and even for him, he was like a spectator at a play put on for his own benefit. He doesn't really make choices; he just reacts, and the external representatives of his choices are killed for him, as if he were part of an allegory.  (Bang! There go the Racist and his sons. Bang! Psychopath and Suicide both ruled out.)

He's left with a remnant of wise Yellow Hawk (in the form of the grandson) to lead him upward. Nothing but symbols, all the way down.

Don't do things like this yourself, when you write. The plot should arise from the needs and motives of the characters, not from some desire for a predetermined message. The characters need autonomy if they're going to act realistically, and each of them needs to have his own story, however little glimpsed.

Cardboard heroes and villains alike are no more compelling than the breakaway furniture of early Western movies. If they don't behave like people, for reasons that real people have, they aren't interesting.

If you must convey a meaning in your story, don't use the sorts of shortcuts you see in this movie. Hint at parallels, don't draw them out with a magic marker. Convince us of a character's growth. Don't throw away all the other characters when you're done with them, making it obvious they have no life.

Above all — eschew identity as a shorthand for individuals. Showing that each group has good and bad people doesn't make this a story about individuals, and it's only individuals that we care about. If the individuals aren't any better than puppets, who cares about the groups?

What does this movie think it's doing?

What I find fascinating is that this movie quoted two other famous movies:  The Wild Bunch (“I can ride…”), and Unforgiven (“I've killed women and children. I've killed just about everything that walks or crawled at one time or another.”).

I can't readily imagine two Western movies less politically correct or congruent with this movie's message. I suspect that this movie is trying to suggest that it is more progressive than those two movies, that it demonstrates the right way to become forgiven and to tame the wild bunch.