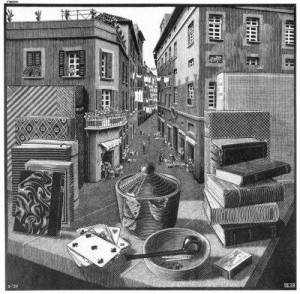 It's time to look back on 2017 and take stock — what worked, what didn't, and where I spent my time.

Early in the year, just after I released the 4th and final book in The Chained Adept series (On a Crooked Track), I decided to pause my miscellaneous plans, including my audiobook recording, in order to devote the year to a major ascension of my learning curve for marketing, making 2017 the Year of Marketing.

* Third website (for Readers) with professional branding elements – KarenMyersAuthor. This is a companion to HollowLands (for Writers) and Perkunas Press (Publishing). Facebook & Twitter persona to match.
* Courses in Amazon Ads and Facebook Ads
* Advanced newsletter services and landing pages
* Related tooling up in video and other image processing
* New author photos and bio (not getting any younger) 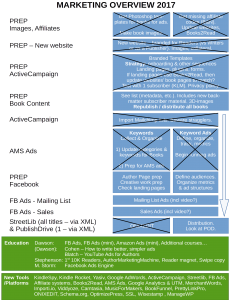 Not all of this was finished in 2017, but everything except the Facebook Ads is now up and running, and the first FB ads should get implemented fairly early in 2018.

While I was doing all this technical stuff, I also tooled up in other ways — republished 20 titles, created ONIX records to make broad distribution more professional, and even added a fancy email signature with the new branding, for engaging with readers or fans. 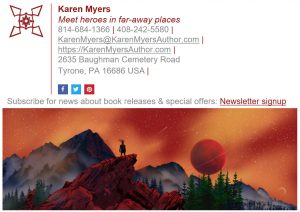 On the publishing side, there were several unexpected developments.

* Two paid consulting gigs bringing manuscripts to market for a couple of authors, one a colleague and one a stranger.
* New imprints. Three old friends who are not in a position to get beyond the manuscript stage themselves (age, infirmity, tech competence) have manuscripts that need publishing, indie style. I have a long and trusted relationship with them, and it's a great way to get started publishing other authors

Finally, on the writing side, I was able to get some work done. I completed the paused Structures of Earth, the first book and prequel for the new series The Affinities of Magic. I'm well along on book 2 (Fragments of Lightning), and I've lined up a cover artist for the series since my old cover artist is no longer available (stay tuned for several cover reveals).

The big monetary experiment (other than diversion from writing production) was advertising on Amazon. The volume of sales for the advertised books and the related series titles was very encouraging for my first forays, and the ROI is running nicely.

A look at the results below. My weakness has always been marketing (hence the investment in 2017). You can see the comparison of volume from organic growth (pushing the second book of a series, etc.) vs regular commercial advertising. There's a lot more I'll be doing with Amazon, and I'm eager to add Facebook to the mix for its international component. 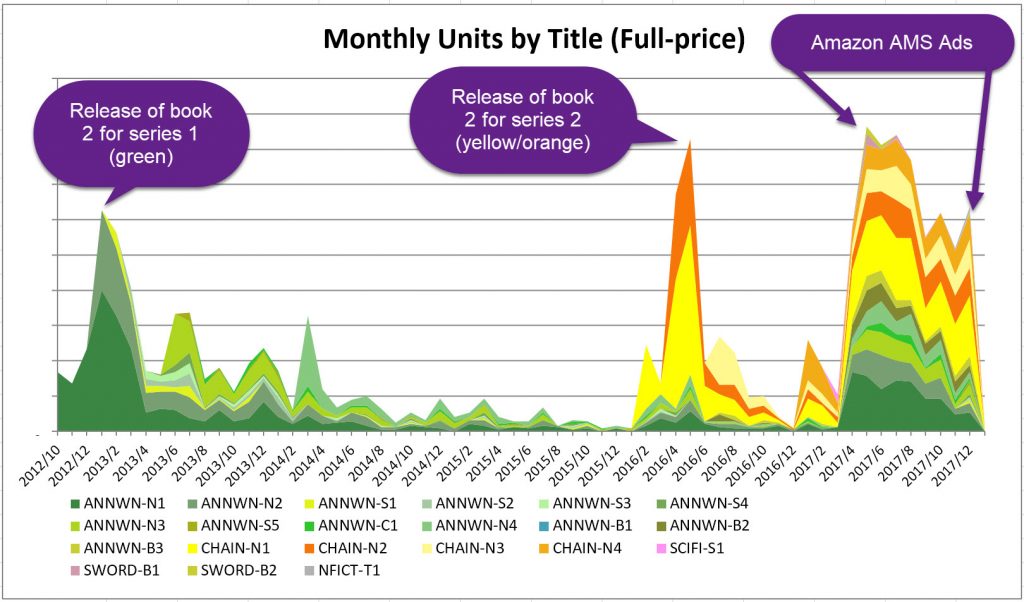 Choices of projects for 2018

* Get the first four books of The Affinities of Magic completed, and begin releasing them one by one once book four is nearly done so that I can start the new series off with a bang. This fantasy series will be more like a detective series, the way Jim Butcher's Dresden books are, where each book is more or less stand-alone instead of a long overarching plot, like a trilogy. If they meet with success, I may write several more titles in the series.

* Start bringing out more books in the new imprints, by other authors, and perfect the contract and reporting requirements.

* Start on more audio books (in my copious spare time)