The world of deep metadata for your books: LCCN, PCIP, MARC, ISNI, ISTC, OCLC, and more-2

Posted in Just for Writers, and Publishing

Remember the card catalogues in libraries (if you're old enough)? This is the same sort of information, done as a brief bibliographic block that goes at the bottom of the copyright page of your book. It takes the place of your LCCN statement (because it incorporates the LCCN on the last line) like this:

Even though LCCNs are only for print editions (see above), and the LCCN is included in the CIP block, the same CIP block applies to all formats of the work (Print, EPUB, MOBI, Audio). A PCIP block (see below) can be created for books without LCCNs, including books that have no print edition.

Let's look at some of these cryptic numbers.

The ISBN is the 13-digit version. It has a complex history of its own. A digression — the original ISBN (International Standard Book Number) was 10-digits long. As it began to run out of numbers to accommodate new books, it evolved into a version of the 13-digit EAN (European Article Number), an identifier related to the UPC (Universal Product Code) for any manufactured article in the world. The first 3 digits of the EAN indicate the country and, since books were already considered to be international, the prefixes “978” and “979” were dedicated to books, and consequently referred to, jokingly, as the country of “Bookland”.

The 10-digit ISBN is always called an “ISBN”, but the 13-digit version can be referred to as an “ISBN” or, in a nod to its derivation, as an “EAN”.

The “PS3613.Y4726T6 2012” is a Library of Congress Call Number (which, despite its initials, is not to be confused with the LCCN above). This book is in “American Literature / Prose fiction”.

The “813′.6–dc23” is a Dewey Decimal Classification. This book is in “American Literature in English”.

This information comes into use in unusual places. For example, the page that booksellers see when they look at Ingram Ipage to place an order shows this detail: 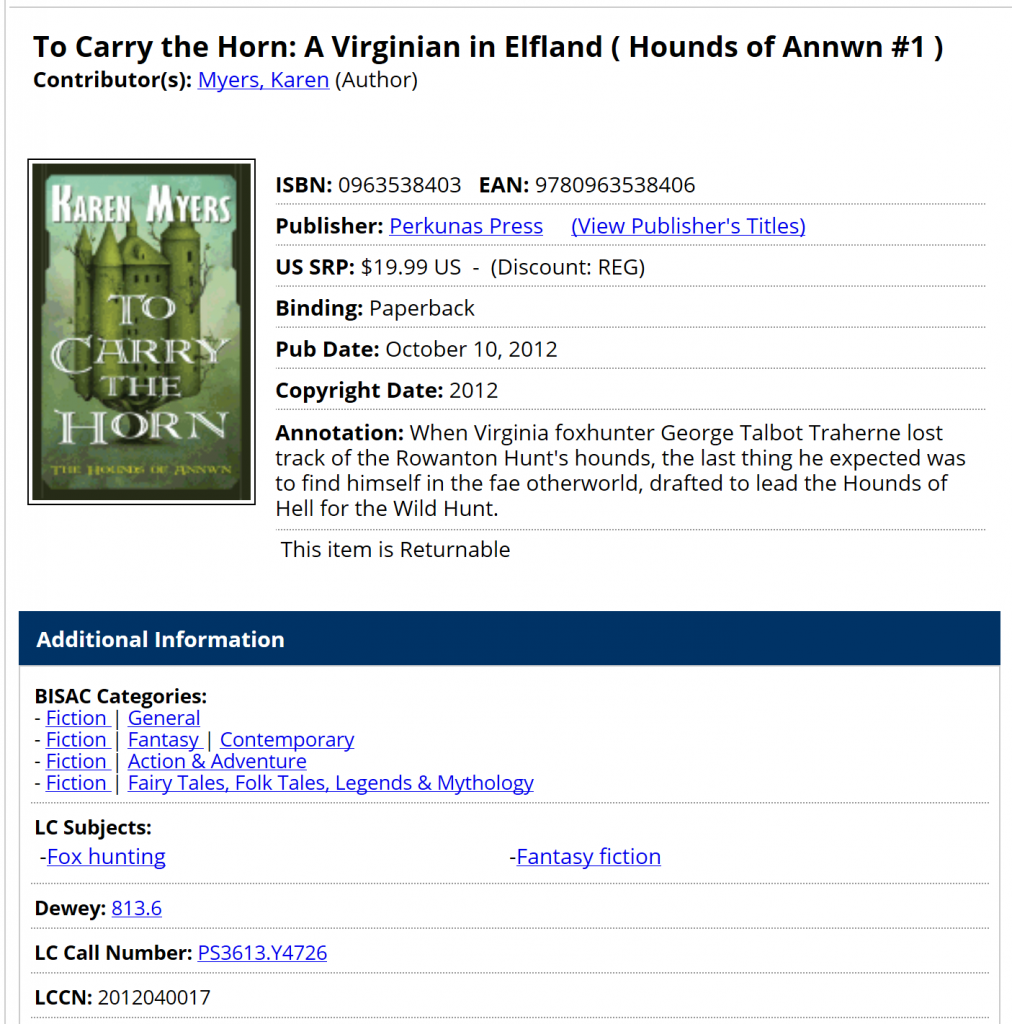 Notice that the LCCN in the above example ends in 40017, for a book published in October of 2012 — in other words, in that year there were probably about 60000-70000 books for which publishers requested an LCCN and then a CIP block from the Library of Congress.

Alas, the LoC only goes to the effort of creating the CIP block for about 50000 books per year. They have a semi-automated process, but it still requires human intervention, and they've taken steps to deal with the onslaught of volume since 2012.

Indies need not apply. That's right — if you're an imprint with only one author (specifically, that has published fewer than three books by an author other than yourself), the LoC assumes your books are not likely to be in sufficient demand that it is worthwhile to create a CIP block in advance of a request. They can always create a CIP block later, if enough libraries ask for one.

So while I received a CIP block for my first book, above, the LoC declined to do the same for my next book, two months later.

What can you do?

There are a handful of independent 3rd parties who create CIP blocks for publishers. The result is referred to as a PCIP (a Publisher's version of the CIP) to distinguish it from the sanctioned LoC CIP. Companies such as FiveRainbows, Donahue Group, Quality Books, CIPBlock. and others will prepare a PCIP block for your books, for a fee. Some of them also create MARC records (see below).

There is more useful information from Joel Friedlander here, especially as the discussion is continued in the comments on his post. This comment from Lisa Shiel of FiveRainbows is especially helpful for sorting through some of the CIP and LCCN-related acronyms.