It's time to look back on 2016 and take stock — what worked, what didn't, and where I spent my time.

For the first time, I managed to publish four books in eleven months — an entire series (The Chained Adept: 2/2016 thru 1/2017). The whole thing was an experiment in writing as a “pantser” (by the seat of my pants), without an outline (other than the basic inflection points of the story). I liked the freedom of the process and will continue that way.

I also packaged up and released two book bundles for the Hounds of Annwn series and expanded my international distribution.

My formal goal was an average of 1000 words/day, but I was working toward a stretch goal of 1500. When I was in the thick of my novels, 2500 words/day or more was normal, but there weren't enough days like that to carry the entire year. 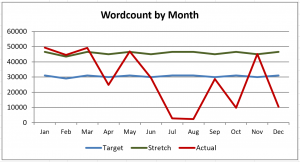 I wasted rather more than three months inbetween books, especially after losing momentum at the end of the third book. I need to park myself in my chair more reliably. There's no reason that four books/year isn't a perfectly achievable goal.

Choices of projects for 2017

I'm in the process of releasing On a Crooked Track (The Chained Adept: 4), but as soon as that's finished, I'll be taking up The Structures of Earth (The Affinities of Magic: 1) that I put on hold to write the Chained Adept series. My current plan is to write several books in the series (perhaps the first four or five) and then release them one right after another beginning in early 2018.

Perhaps my nerve won't hold and they'll come out one at a time before then.

No matter what else is going on, get the writing done. The WIBBOW test applies to all potential distractions (Would I Be Better Off Writing).

When things are going well, I find that 2000 words/day is no difficulty. My goal for the year is only 1000 words/day, overall — that's about three novels. It shouldn't be hard (I keep telling myself) — I did it in 2016. The stretch goal, which I hit for several months in 2016 if not overall, is more than four books.

Part of this is getting better at working my own psychology. I must write first thing, before I even look at email in the morning. I must make the writing the number one priority.

The other part of this is recognizing that whenever I feel something has bogged down, there is no point evading the issue — look at it hard, figure out what's wrong, and deal with it. I told myself this last year, and it's still true.

So far, I've done very little marketing, but that's going to change in 2017, now that I have two different completed series. I'm determined to create and follow a set of marketing experiments and plans — it's the learning curve I am furthest behind in for this new world of indie publishing. Expect to hear more from me, as a result.