Why inconsistencies in fiction matter

Another Irritated Review™. I'm just making my way through the 17-book Joe Pickett series by C J Box. On the whole, I like them well enough to buy them (at the grossly inflated traditional publishing prices), but I'm also noting small inconsistencies in factual matters that are irritating enough that I want to expand upon them as a case study in a blog post.

These are mysteries set in Wyoming, and our hero is the game warden Joe Pickett. Each book has an ensemble of continuing characters, and introduces new ones, chiefly to serve as the villains and victims of the particular book — no different from dozens of other, similar series. The writing is professional and reasonably polished, the plots are all right, and the characters suffer the standard long series weaknesses of static personalities or situations — after two decades, you expect them to have matured more than this. All of this is par for the course.

What keeps irritating me are the unnecessary errors of fact regarding the real world, and the unforced errors of prop inconsistencies. (While these are all the author's responsibilities, aren't editors at traditional presses supposed to help catch these?)

Any genre where the details of the tools or weapons used are important attracts readers who know those tools intimately. It's a truism of the thriller genre that authors dwell lovingly on particular models of guns, for example, and as murder mysteries set in a hunting environment, the Joe Pickett books are no exception.

While I'm willing to give writers a pass on absolute arcana in this area, they need to get the basics right that anyone acquainted with the field would know. Otherwise I'm knocked right out of the story. And it's not just weapons — ordinary tools need to be used correctly, too. For example…

Someone checks out a new very large caliber revolver. It weighs three pounds, and it has a mounted scope. Now visualize this — three pounds is a lot, and a scope on top of the barrel for a handgun means something that's almost as tall as it is long. Got that picture? Good.

Now picture him twirling the handgun by its trigger guard to get a better feel for it. On one finger, necessarily. Now, I'm willing to believe that this is possible, but it would certainly be very clumsy and I can't picture anyone doing it. Can you?

The gunfighters who do this in Western movies are using much lighter guns, without scopes. And they're doing it for effect, not to get a feel for a weapon.

Someone leaves a cartridge for our hero as a message “I was here”. The hero catches sight of the gleam of bronze.

Sigh… Cartridges (for those who don't know) are the things you load into a modern handgun or rifle. They contain a bullet at the front (made out of various materials but typically lead), gunpowder (the burning gasses of which propel the bullet), and a primer at the back that the gun's hammer causes to explode which ignites the gunpowder. All of these things are held together in a cartridge case, usually made of brass.

Brass, not bronze. Yes, I know, both are yellowish metals that start with “br” but bronze has nothing to do with firearms, and brass is so generic that the term for cleaning up after yourself at a shooting range is to “police your brass.”

The writer could make up a gun manufacturer, describe a nonexistent handgun, etc. — that doesn't matter. But no one who has ever shot or even read about guns is likely to use bronze when they mean brass. It's either an accidental slip, or genuine ignorance at a fundamental level. The reader can't tell which, but it certainly struck me as the latter, which completely undermined the author's credibility, as in “why am I reading about something from an author who has no idea how things work?”

A character carries around knitting as a character trait. She's a beginner, and she has one project in her bag — an endless simple scarf. We also hear about how she uses her cowboy boots as a place to store her needles.

I did a little survey and clearly the men of my acquaintance were puzzled about why I found this outrageous, so bear with me. Knitting (for those who've never thought about it) is the craft of making loops of cord fit into other loops of cord. When you're done, you do something mysterious so that the final row is no longer open loops that can unravel all the way down.

So, picture someone knitting a muffler, moving material from one needle to the other. At every point, each loop is parked on one needle or the other. At the end of a row, one needle holds all the stitches, and the other needle is empty. Got that?

So exactly when, given an ongoing project stuffed in her purse, can the character have more than one needle stuffed down her boot? (Ignoring the other issues about bent or broken needles, discomfort, etc.) Besides breaking me out of the story, this also gave me a vivid picture of editors (in the predominantly female world of traditional publishing) who don't knit and never met a knitter (or who simply don't read the books).

(For my knitting readers, yes, I can visualize more complicated situations but — trust me — that's not what's being described here.)

Falconry (and hawking) are general names for the sport of hunting animals using birds of prey. The term “falconry” does not imply that all the birds used are literal falcons — hawks and eagles, for example, are not falcons. The term “falcon” refers to a limited family of birds, while “falconry” refers to the practice.

In the series book, Force of Nature, we are treated to the following passage:

Nate nodded. “Yes, they’re the lowest and the most unreliable of the falcons. There’s a royalty of falcons, starting with the eagle, who is the emperor. The gyr falcon is the king, the peregrine is the duke, and so on. On the bottom of the pecking order is the kestrel, which is considered the knave or servant.

Sigh… This is a misunderstanding of a famous description from the Boke of St Albans, 1486:

An Eagle for an Emperor, a Gyrfalcon for a King; a Peregrine for a Prince, a Saker for a Knight, a Merlin for a Lady; a Goshawk for a Yeoman, a Sparrowhawk for a Priest, a Musket for a Holy water Clerk, a Kestrel for a Knave.

The eagle is not an emperor of falcons. The eagle is the hunting bird for emperors doing falconry. (The eagle isn't a falcon at all, of course, any more than a goshawk or sparrowhawk is.)

Now there are issues with the list from the Boke of St Albans (see here), but not even a reliance on Wikipedia can excuse this fundamental misunderstanding of the history of the sport. Far be it for me to sneer at providing a verisimilitude of expertise for use in fiction, but it needs to go a little deeper than this.

From the same book as the “eagle emperor” mistake, we get another more obvious blooper. (I'd find another editor, if it were me). Our hero is saved when he catches “the sharp whiff of carbon monoxide” in his car and realizes he needs ventilation.

I'll bet just about every reader knows that carbon monoxide is odorless, tasteless, and colorless — that's why it's such a deadly threat.

These are entirely unforced errors. These are often easier for a reader to see than the author, since the reader may be going through the whole series at once instead of over period of years.

It seems that game wardens in Wyoming carry badge numbers that indicate their seniority. If there are 54 in the system (the number varies by year), then the most junior wears number 54. As more senior game wardens die or retire, everyone below them moves up a number. This is important to the character of the hero who is busted from 24 back down to the bottom as a punishment along the way. 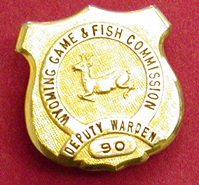 Later, he is reinstated and we see him with badge 21. In the same book (the very next chapter), “nearly a dozen” senior game wardens take retirement to escape a bad boss situation. And yet he still has badge number 21 instead of, say, 11.

But don't worry — in the next book, he's back to badge 24 (his original number in book 1). Since you can't hire people with greater seniority (they have to earn it), there's no way under the system described for him to go backward. In fact, just to add insult to injury, a more senior game warden is removed from the system by the hero in the prior book, so at the very least he should have advanced to 20 from 21.

It may seem like I'm making too much of this, but a major thread throughout the series is about the hero's miserable career vulnerability to his bosses and his position on the ladder. It may not matter much to the plots, but it certainly matters to the hero, and we are just as conscious as he is of the impact of bureaucratic changes. This inability to keep the badge numbers straight, after taking quite a bit of trouble to explain the system in several books and to joke about it, is a mess.

Our hero stumbles across an injured female bald eagle. He applies first aid and hands it over to a friend who does falconry. We hear about this eagle over three or four books. From one book to the next, she has changed species to a golden eagle. She's a minor character in her own right, so it's not as though we don't notice.

So why am I making a fuss about these admittedly minor issues?

Because each time they throw me out of my reading experience like a slap in the face. In my opinion, anything that breaks the reader's trance is a fault, whether it's the rereading of a clumsy sentence, the flip back to check which name goes with which minor character, or the head shake of “that's not how it works!”

Some of these errors may be simply slips (e.g., “bronze” for “brass”), but some of them could only occur through actual ignorance of the expertise being portrayed (eagles as the emperors of falcons, knitting in progress with no needles). That disturbs my belief in the credibility of the author, my trust that he will not violate the story world I am engaged in. He doesn't need hyper-depth in a field of expertise (so often simulated by a loving description of a gun model straight out of an internet review or catalogue), but he does need common knowledge in the field.

The continuity errors (bald eagle to golden eagle) are more forgivable, but errors in logic, like the badge number that doesn't change when the explanation for how it works indicates it should, are worrisome, especially in a mystery series where plot logic is paramount.

I do recommend the series for those who enjoy outdoor mysteries. I think that, if you look, you will find issues like this in many series.

As an author, I used to assume that traditional publishing editors would catch many of these things, but clearly that's no longer true, if it ever was.