A company called ProFantasy specializes in software for creating all sorts of “worlds” useful for gamers, as well as authors and other creative geeks. These range from entire star systems, the interiors of spaceships, and planets to regional maps, cities, dungeons, and ordinary interiors. In the hands of a talented illustrator, these tools can make Tolkien-level drawings for your viewing pleasure. In hands like mine, I get nice color pictures that I can use to plan my books, and even provide context for my readers (scroll down to the bottom of this linked page).

This world of the Chained Adept was built using a product called Fractal Terrains 3. It was created entirely by algorithms plus a random seed. (You have to love a product with a “World Settings” palette.) 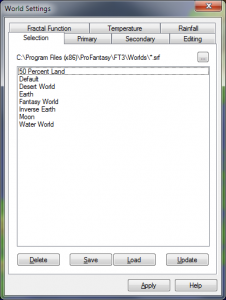 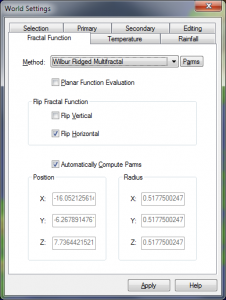 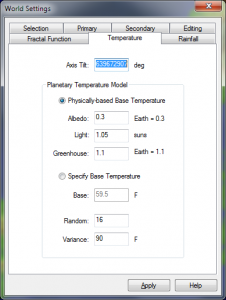 Like any good procrastination toy, this resulted in hours of poking at parameters to see what would happen. One of my test settings generated a world where all the land mass wrapped around the globe in a giant spiral. (I saved those settings — you never know…)

The resulting terrain is fractally generated down to a surprising amount of detail.

In this instance, I decided to exaggerate the natural rift valley by increasing the depth of the lake terrain, and to show the effects of erosion from the Mother of Rivers which exits at Pingmen Harbor. Rivers are generated naturally but they aren't normally visible on a map at this scale. Conveniently, you can to some degree override the local landscape with channels for rivers to use (what I think of as the “finger of God” effect).

So, faced with this world which I rather liked the look of, I started drawing on pictures of it with another tool (Snagit Editor) to create national boundaries for the portions I wanted to use. I knew that the hero of the first book would travel a long way from a distant location to the place where the story's action would occur, but that was all I knew. The basic plot in my head had no setting.

Rather than build the world to my plot setting, I built the plot setting to my generated world.

This had the tremendous virtue of forcing me to think about the economics and culture of the geography, and bring that into my story. I knew where the rivers were, the gorges they came through, where there were plains and where mountains. It was an invaluable aid to keeping the story and the background cultures grounded (so to speak).

The terrain suggested lots of plot elements — trade cities above rapids where portages had to happen, defensible boundary crossings, lush agricultural districts, centers of mining and other economic features, and so forth. My characters ended up with their feet planted in real terrain and real physical barriers to deal with.

I cleaned up some of the annotated maps for the bottom of the book page for The Chained Adept. For my own private use, I have a version with every placename so far.

Now, as I turn to Mistress of Animals, I'm using part of the map with a fresh set of annotations, just for me, where I'm working out who is where and when, and how their paths cross.

A little explanation is needed — in the central part of Zannib, most people are nomadic tribesmen. This is the furthest south nation in the world and consequently quite cold in the winter, and the culture is rather reminiscent of Mongolia. Each tribe has one or more clans, and each clan does an annual migration with its herds based on a winter camp to which they return. All the winter camps for the clans of a tribe are near each other, and there are winter celebrations that take advantage of this. So if you look at the map of clan and tribe territory, you will find there is a central area of consolidated clan winter camps, rather like the center of a flower, and each clan's annual migration route extends out from that into its own pastures, rather like a petal of that flower.

For the purposes of my story, it's winter time, and all the tribesmen are in their clan winter camps. So my map mostly just shows the winter camps of various tribes as the central ring of clan camps. Only one tribe is illustrated with the migration routes of its three clans, because the plot needs to know those details. Various people have traveled various routes from various places to get where they are as the story progresses, and this is how I'm keeping track of it.

Note the scale, on the bottom right. That comes straight from “real world” measurements from the original Fractal Terrains 3-generated world. Remember, you've got to stay honest — the discipline helps keep your stories grounded.