See part 1 on this topic. 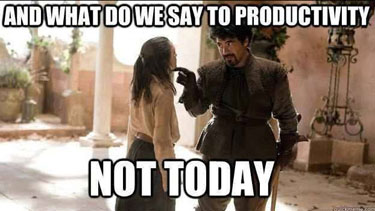 The features of a useful writing procrastination project are that it produces something of long-term utility, and that it has a natural end.

The work I've been recently doing on my genealogy fits, since the information I can pull from records about my family tree (assuming a judicious pruning of remote cousins and in-laws) is finite. You can read about that here.

The second project is larger, but even more finite. You see, I have this website of Scandinavian fiddle tunes…

Twenty-five years ago, in my 30s, I was listening to some Swedish twin-fiddle records (of which I already had a few dozen — now many hundreds). As a harmony singer I've always been a sucker for two- and three-fiddle folk music performances, and the best of these come from the Swedish folk tradition.

I said to myself, “Boy, I like this stuff. Gee, I wish I could do that.” And then the light bulb went off — how hard could it be? I had a musical background and knew my way around a piano and a guitar (as an amateur).

So, I picked up a violin for the first time, just to play the Scandinavian folk repertoire, and never looked back.

You can read about this in some detail here, but the short version is I've been going to workshops and playing solo and with small bands now for a very long time, primarily for the use of dance groups who are equally fond of the folk dance traditions of Sweden and Norway.

Playing for dances in pick-up groups means you carry around huge binders of material because the repertoire demand for all the dance forms is very large in the Scandinavian genres. It's not like, say, Irish, where if you know jigs, slip-jigs, reels, waltzes, and polkas, you're covered for most dance requests. No, the tune categories alone are broad, and many of those categories cover several different dance types with different musical requirements.

I improved the situation by using early digital music printing programs to create binders of incipits, the first bars of each part of the tune, to serve as quick hints for what tune to play next for dancers.  Then, naturally, I put up a website, Blue Rose, where those lists of incipits went online, with links to PDF files for each tune, so that people who played together regularly could find them. When I went to workshops, I posted the tunes we learned for everyone to use.

Over time, this grew…

There are now 2000 Scandinavian fiddle tunes in my binders and up on Blue Rose. 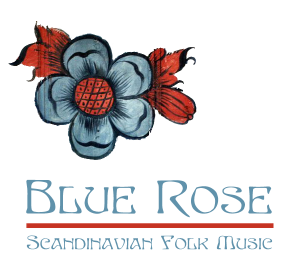 Until recently, I had only transcribed about half of them to clean digital versions from scribbled-up paper copies. The rest were multi-generation photocopies, hand-written tear sheets, marked-up variations, and so forth — the sort of detritus found in any folk musician's reference binders. This didn't bother me, since I play from memory and the tune pages were just reminders.

The incipits for all the tunes were on the website, but not the full transcriptions — only those for the tunes I had transcribed digitally made the grade. And so it went for more than ten years.

This all changed recently. Google forced people to upgrade websites to make them mobile friendly, and my technology for Blue Rose was old and stale, so I converted it to WordPress and moved over all the pages of incipits. That didn't take too long, but I've never been happy about having only half the tunes up in full transcriptions.

So I started down the slippery slope… I scanned in the tunes that were paper-only (1050 of them) and added those PDFs to the website. Now Blue Rose had everything in my binders and all my tunes had PDF versions. Yay!

At the same time, I picked up an iPad and the ForScore app so that I could now carry all 2000 tunes on a single tablet as PDF files. That was terrific — no more binders to tote around.

But then… some of those scanned tunes were just horrible: blurred, barely legible printouts. So I sorted them into “Terrible”, “Pretty Dim”, “Hard To Read”, “Not So Bad” classes and the inevitable occurred — I started transcribing them, tackling the worst first and vowing to stop after the worst ones were done.

I knocked out a hundred of the worst. Then another hundred. Every time I wanted to stop, the scanned tunes that were left still looked awful to me, even as the sorted classes that remained improved. Who wanted all those dirty tunes polluting the nice tidy digital transcriptions? Especially when I looked at them now on my clean, high-tech iPad…

The 950 tunes already transcribed when I started all had to be lightly upgraded, too, since the transcription software (Sibelius) had evolved, the template formats needed to be improved, and I have revised my notation style standards.

So the task I gradually set myself meant I had to touch all the original tunes (twice) as well as the scanned tunes (once to scan, again to transcribe). 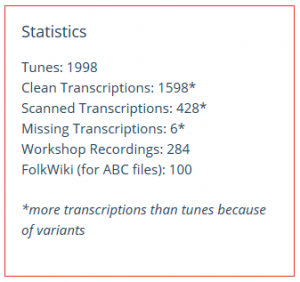 Now, the good news is, this is a finite job. I have 400 tunes left to transcribe, and 1200 to touch-and-upgrade. And then it will be done.  Natural growth is modest and easily accommodated.

The bad news is, when I should be writing, this sits there like a brightly-lit pinball machine and blinks at me, with little electronic noises, and says, “Just another 10 tunes to move the counters along. You know you want to.”