Win free ebooks on May 18

I'm participating in a Facebook Party for a new release of The Roar of Smoke, a book by Candace Carrabus.

Every half-hour, from 12:00 – 8:00 EDT, a new author will join the Facebook page and offer prizes and ask a question/sponsor a discussion. The winners of the prizes will be picked from the participants.

Here's the list of participating authors and prizes, along with their time slots (in Central time). To join the event, click here.

Lots and lots of books being given away — go check it out!

Interrupted by a woodcock family

Some procrastinations are grasped gratefully, on the grounds that at least something is being achieved, even if it's not writing.

Rebuilding eight websites to comply with Google's “mobile-ready” imperative falls into that category. Which led me to update my BlueRose website, which led me to clean up the 2000 tunes that live therein, buy an iPad so I could throw away my music binders, fix all the metadata for 2000 files, etc. Three weeks later, my obsessive nature is gratified, but not a word's been written (sigh…).

Other interruptions are unforeseen.

A couple of days ago, a neighbor who was mowing for us caught sight of a mother woodcock on parade, taking her four babies on an outing across the newly cut grass behind the cabin. She flew off, dangling her wing in an attempt to lure the human predator away and her chicks obediently hunkered down, trusting to their camouflage. They didn't move so much as a bit of down, but if you click on the picture you can see their beady eyes watching me.

Whereupon I tromped around with a camera for a few moments, before letting mom come back and take the chicks off into the woods.

I would have delivered photos sooner, but my dedicated photography computer decided not to start, the other copies of the software I use, on my laptop, failed to run, and there's no help desk support on a Sunday. Grrr!

It's not the event itself that takes the time, but all the technology wrapped around it that promises to make things faster. Three minutes to play a tune vs half an hour to set it in a score, label its metadata, and stick it on a website. One second to snap a photo, half an hour to flounder in a morass of “but it was just working!” technology. One minute to write a paragraph — how long to look for a virtual pencil to sharpen? 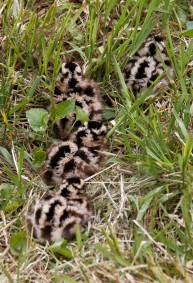