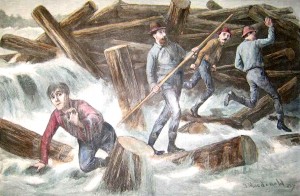 After four books, I've learned to trust that inner voice that says don't write any more until you figure out what the problem is. I've discussed the difficulty of putting new characters into a story when you don't know them well yet, but that didn't seem to be the issue.

While I've been chewing on this, I've been doing work on some of the research aspects of the series, and recently turned my hand to the magic system. This series has magic, as a typical fantasy series does, and I had thrown together some lists of powers and guild houses to go with them, with just enough specificity that I could get started writing. I knew I could amplify the details as I needed them.

Since I wasn't advancing on the narrative, I started to write a little handbook of the magic system of the world, not from the point of view of the characters who are just starting to find out its fundamental principles in the book, but from the godlike authorial perspective. I detailed how the powers worked, where they came from, why they varied in individual people, and how the guilds embodied particular sets of them, and what that meant about the personalities of the guilds, their alliances, and history.

Boom! And just like that, the logjam was broken. Suddenly I understood how the guilds would behave towards each other and towards their members. I understood much more about my characters and their relationship to that history. You see, the series doesn't just have magic — a fundamental part of the plot is about the magic system, bringing it under rational control. Until I understood how it worked in detail myself, I couldn't make anything else real.

Within a day, I could feel the fizz rising from my backbrain. My brain had been so preoccupied with “this is the start of a long series – you hafta get it right” vs “move the characters around towards their goals” that

I didn't grant the magic-system world-building serious-enough attention to give them a background to move around in.

Here on my fifth book, I've learned some confidence — if my brain shuts down on forward progress, it's right. Something important isn't working and has to be fixed. It's a different something every time, it seems, but I love the feeling of fixing it and being able to rush forward again. Now my characters can march along once more, with a clear path downstream.