It's been a busy, busy year. Here are a few of the highlights, but before you read, go take a look at this announcement from Perkunas Press, so I can brag a little.

In the spring, I moved the contents of two houses and a warehouse from Virginia to Pennsylvania, into a cabin and a very big warehouse. That major disruption took over my life for quite some time, as I am daily reminded when I look at all the boxes in my office yet to be unpacked.

We purchased Baughman Hollow Farm decades ago, in a brief moment of fiscal responsibility, but it hasn't had any permanent inhabitants for over a decade, 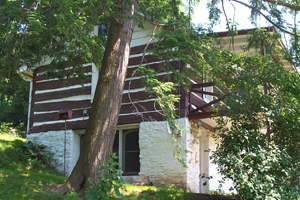 so we're still catching up on some of the basic maintenance tasks. It's a nice place, about 300 acres, mostly wooded, and full of deer, turkeys, and black bear. Local coyotes, porcupines, and barn owls have all come by to say hello. The cabin was built in 1812, with a modern addition for plumbing, utilities, and some more space. The farm occupies the top part of a hollow about a thousand feet up in the Allegheny Front, and the cabin, nicely sheltered just under the top of the plateau, has a view down to the western edge of the Appalachians across the Bald Eagle valley. The weather comes in from the west along the Allegheny Plateau and sweeps down over us from the back and then on down the hollow.

Unlike the Appalachians, which are the much-eroded remnants of an upthrust mountain chain that goes back to the collision of the African and North American continental plates, the Alleghenies (of which the Catskills are a continuation) are what is known as a “dissected plateau”, an uplifted sedimentary formation through which streams form deep valleys. From a distance, the Alleghenies and the Appalachians in this area look very similar — mountains of about the same size, hard to navigate through, with lots of water gaps.

But if you look more carefully, you'll see that the low mountains of the Alleghenies are all about the same height — they've been cut out from a plateau. It's that similarity of height that gives away the big difference in formation between the two sets of mountains. In this section of Pennsylvania, the valley of the Bald Eagle Creek separates the two distinct terrains.

The Allegheny Front constituted a serious barrier to colonial settlement because it was so difficult to find a way up and onto it. The famous railroad construction known as the Horseshoe Curve in nearby Altoona in the 1850s was a significant technical feat.

As the owner of Perkunas Press, I spent much of the summer moving the business from Virginia to Pennsylvania, and embarking on a re-creation of the website, separating my Publisher and my Author lives formally. My blog and all my writer activities have moved here, to HollowLands, and Perkunas Press is now a formal publishing site. It looks a little bare, with just the one author at the moment, but that's an accident of timing. I hope my husband will begin producing some of his own work, and I expect that, over time, Perkunas Press will support other writers, too.

Earlier this year, just about twelve months since my first work of fiction, To Carry the Horn, was released, I passed an important milestone — 1000 units sold. With deep gratitude to all my readers, I am delighted to have come that far in my first year, when very few people yet know about my work. The books have consistently been high in their category on Amazon. Discoverability remains a challenge (tell your friends!) but the reviews have been kind.

I fell short of my production goal. I published two novels this year, but I had expected to complete Bound into the Blood, too. Alas, I'm only 80% of the way there. The new publication date is still Winter 2013/2014, but more likely January/February.

New this year were short stories and a story collection. The first five came out monthly, but my next two are going to be rather longer and I've postponed them so as not to delay Bound into the Blood any further. (Apparently I ran out of quick, short ideas.) You'll see them early in the new year, after the novel comes out.

I also produced my first audiobook. That was a stiff learning curve, and it's the chief reason that the current work in progress was delayed (along with the disruption of relocating). It's making its way through distribution channels and, as soon as it's widely available, I'll do a general announcement. Assuming I get favorable feedback from listeners, I intend to produce audiobooks for the other novels in 2014.

The self-publishing industry has been a whirlwind of change over the last couple of years, and just staying up-to-date is time-consuming. I'm feeling much more at home now, both as a writer and as a publisher, so I expect to be able to focus more on writing in the coming year. (As soon as I finish unpacking my office!)